Before I had any business watching it, Forrest Gump became one of my favorite movies.  Although the content was too mature for my age, I always found Forrest easy to understand. He was simple. He made me feel better about my inability to comprehend why life was sometimes the way it was.

It came on television the other night, and even though I’ve seen it a hundred times, I couldn’t help watching it again. I came in at the scene where Jenny and Forrest had reunited in Greensboro. She stayed for a while, then- in true Jenny fashion- left unexpectedly. Heartbroken, Forrest did what Jenny had always taught him to do.

As I watched the nationwide coverage and acclaim of his run, something struck me:

How ridiculous it was that a throng of people followed a man cross country on a run that had no clear intention or path. Reporters probed Forrest for answers as to what his run signified: world peace, women’s rights, the environment, animals, or nuclear arms?

Though Forrest’s run lacked a profound why, people were inspired by his uninhibited and audacious spirit. Supporting someone with an unknown cause can be a wonderfully dangerous inspiration. Seeing individuals take extreme measures to better themselves gives others the courage to do the same. The problem arises when we rely too heavily on the journeys of others to fuel our own lives. When Forrest announced that his rove was over, his followers were distressed by the sudden decision. “Now what are we supposed to do?” one man called out.

It’s beautiful to be motivated by the lives of others, but it’s not fair to invest everything we hope to be in the life of someone else. Yet, that’s exactly what those people did to Forrest, and it’s what we do to one another. We see what looks like happiness, wealth, or success in the lives of others and attempt to replicate their actions in hopes of biting off a piece for ourselves.

We follow blindly behind people and movements we know little about just to feel something that halfway resembles happy. The problem with this type of lifestyle is that it’s full of emptiness. Those people who followed Forrest on his run never came to know why he did it. 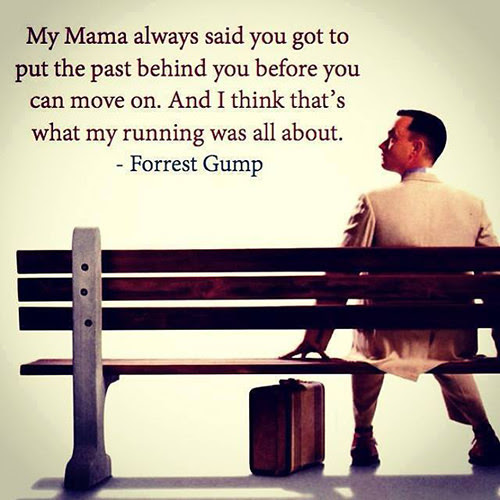 Forrest’s journey was to run until his past was far enough behind him to move forward. It was for him to discover who he was in that iteration of himself.  What I love most about his passage was that it wasn’t until after Forrest returned home that he realized his why was indeed profound.

That’s exactly how life works at times. We don’t know why God allows us to go through certain hardships, but there’s always a reason. One that is exclusive to your journey, who you are and who you ultimately have the potential to be. Your why.  Yet, if we exhaust our lives trying to find ourselves on someone else’s path, it only leads to added unhappiness.

I know sometimes we just feel like running toward anything with a remote promise of happiness; anything that will take us away from where we are. I get it, but that’s when we have to be most vigilant because that’s when our spirits become clingy and susceptible to misplaced inspiration.

My goal isn’t to devalue the splendor of inspiration. On the contrary, my hope is to uphold it, to encourage us to apply it in a way that is beneficial to our lives.  It’s great to be heartened by someones actions and to even be encouraged to go a similar route. However, we shouldn’t base our decisions on what makes someone else happy.

You’re you and I’m me. What moves me may not drive you. What motivates you may not encourage me. We’re each on our own way, yet how wonderful it’d be for our journeys to cross paths. Maybe there’s something you can teach me. Perhaps there’s something I can give you. Maybe inspiration is a collision of two paths- or ten, or five million- meant to give hope, wisdom, and love so that another would be willing to war on against a world intent on their defeat.